A Valentine STEM Challenge:  Catapults and Candy for 5 Red

Last Friday, fifth grade students on the Red Team learned a great deal about force, motion, and structure as they worked in teams of three to meet the challenge of building a catapult that could launch a piece of Valentine candy further than any of the other catapults in the room.

Prior to our STEM challenge of the day, the students were given very little information other than to answer the following questions:  What does a catapult do?  What is a projectile?  How does a catapult work?  What type of simple machine is it (inclined plane, lever, pulley, wedge, screw or wheel and axle?)  How do you know?

After being grouped into teams of three, the students were given the task of designing their catapult and choosing which materials they wished to use from the following list:  up to ten large and/or small craft sticks, one clothespin, one binder clip, one plastic spoon and six rubber bands.

As the students designed, they were instructed to keep in mind the following points – What is your design goal?  How much force will your design require for a successful launch?  What angle launches the projectile the furthest? After the initial catapults were constructed, students took to the hallway to test them. They tried different projectiles that included small and large candy conversation hearts; gummy hearts; and large, sugar-coated marshmallow hearts.

After each launch, students collected data to help them notice patterns and make changes in their design. They quickly learned that the weight and mass of the objects launched made a difference. They all loved the large marshmallow, but no one could get it to launch further than 12 inches while some of the smaller candies sailed well over 20 feet and often even hit the ceiling!

For safety, there was a very strict rule making sure the projectiles were never launched when anyone, even a teammate, was in front of the projectile.

If a high level of engagement is the path to learning at higher levels, then we believe STEM education just may be the best route to take!   Students have a whole new idea of what engineers do and were very eager to stretch their thinking to create a working design.

A very challenging and fun day today!  We’re really looking forward to our next school-wide STEM day this Spring! 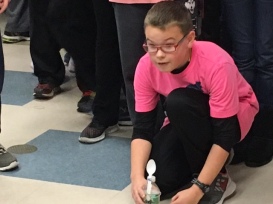 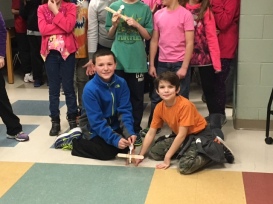 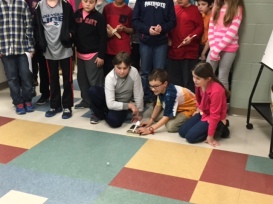 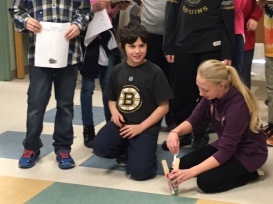 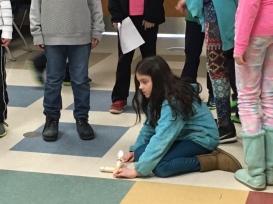 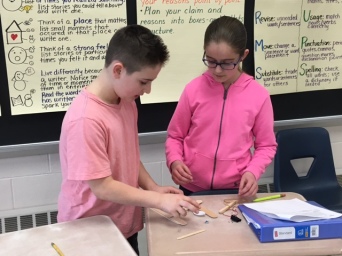