Students on the 6 Red team are working on a great STEM activity during E Block, formerly known as the Band & Chorus Block. First, students learned about how objects fly using the four forces of flight-drag, lift, thrust, and weight. Next, they watched a Utube video about the Wright Brothers. 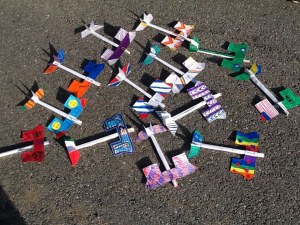 Then, they were given the task of designing their own airplane. Students had to create the fuselage first.

Then, they used their creative juices to decorate the wings and rudder before gluing them to the plane. Students attached paperclips as mass.

The final phase of the project was to go outside and fly them! Thank you to Ms. Baldwin for this great project, the students loved it! Check it out!